In answering, We will emulate, in part, the thoughts in the lead editorial of the New York Sun, Sept. 21, 1897

"Yes, Virginia, there is a Santa Claus."

Yes shooter, there IS a secret to shooting high pistol scores. It exists as certainly as love,

The secret to shooting high scores is slowly revealed and compounded by the volume and density of the attributes of persistence, hard work, sacrifice, and tenacity that the shooter develops, in a combining overall attitude relative to the goal of high scores. The secret is elusive; it appears and disappears in direct relation to the volume and density of these attributes. The more time and effort the shooter devotes to the goal, the more the secret is revealed. 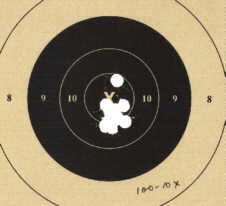 Regarding sacrifice: "Being a Master shooter is doing all the shooting he loves to do on the days he doesn't feel like shooting!"

This sacrifice mandates hard work, with the accompanying persistence and tenacity to carry it out. It must necessarily occur without any encumbrances, mental or physical. The quest must be an unrelenting pursuit of the goal. The shooter has to be thinking of shooting most all of the time. The shooter's focus on shooting must thoroughly possess him. In the morning prior to the match or practice he must visualize the drills involved. In the evening just before going to sleep he has to fire a match in his minds eye, shot by shot! The shooter must also observe the actions and attitudes of High Master shooters, and converse with them so as to learn all he can.

These possessive thoughts must include not only the shooting itself, but all the peripherals involved, such as equipment care, ammo supply, travel equipment, and travel planning, etc. In addition, the thoughts require analyzing new shooting techniques and changes in equipment. In other words, the shooter must constantly be concerned with the sum total of the entire drill involved in his endeavor to unlock the secret.

Regarding encumbrances: Hershel Anderson, USAMTU, multiple times National Matches Winner and the shooter holding THE highest 2700 Record of all time [2680-159x], had the least amount of physical encumbrances of any shooter we have ever known. His equipment on the line at the National Matches consisted of the match gun, two magazines, match ammo, and a gun box with spotting scope. The gun box was otherwise empty and unadorned! Simplicity at it's finest! His mental encumbrances were, in all probability minimal or nonexistent. He completed his Army career at the USAMTU as a National Matches Winner, and then returned the following year for another National Matches win as a civilian. Hershel's record score was fired July 24, 1974 in Nashville, TN.

In regards to equipment: Gil Hebard, a National Matches Winner ['50s/'60s], and principal merchant supplier of pistol shooting equipment in that era, remarked that a shooter may be able to "buy his way to the secret". Gil may have been slightly biased, but most knowledgeable shooters will find no real fault in the fact that decent equipment is vital to success.

To have the secret revealed the shooter must constantly demand of himself the possessive thoughts about shooting. The reason for this is to load the sub-conscience, so that many, or even all, parts of the entire shooting drill will allow a robotic reaction on the part of the shooter, guaranteeing the proficiency gain required to master the gun.

How about this scenario? Kim Dyer, USAMTU, Who fired a Women's National 2700 Record at Eustis, Fla. in the '70s [all of 26 years old and 98 lbs. at the time], when asked, "What do you do with an unscheduled afternoon?" Said, "Well, I grab two cans of hardball [ammo] and head to the range." Imagine! 500 or more rounds of hardball shot by a 98 pounder, in one afternoon?
Tenacity at it's ultimate!

The secret to shooting high pistol scores is self-rewarding. It is part of the competitive spirit that drives the shooter, permeates the balance of his life, and offers him success in his other pursuits. Once you attain it you will always remember it, but it takes constant vigilance to keep it.

The secret to shooting high pistol scores is real and attainable, but intangible, and not always readily explainable. But as sure as there is love, generosity, devotion, persistence, hard work, sacrifice, and tenacity in the human spirit, and as sure as there are leprechauns in Ireland, Santa Claus, and the Easter Bunny, there IS a secret to shooting high pistol scores!

"None of us will ever accomplish anything excellent or commanding except when he listens to this whisper which is heard by him alone." Ralph Waldo Emerson, poet.